In the last post I summarised a recent Report indicating that heightened negative emotions at work cause or exacerbate anxiety and depression that cost Australian businesses an estimated $10.9 billion annually.[i]  I noted that the behavioural-science discipline of ethology is especially suited to analysing emotions in organisations.

This post briefly outlines the behavioural science discipline of ethology and the more pertinent discipline of human ethology. It provides resources for further exploration of these subjects.

An inspiring introduction to ethology is a 2010 lecture by Robert Sapolsky[ii] at Stanford University. Sapolsky explains how ethology developed in the 1930s when animal psychology was dominated by behaviourism, a theory in which animals and humans are blank slates able to have any behaviour imposed upon them through reinforcement. Evidence for this consisted of experiments on caged rodents. In contrast, the early ethologists began by looking at animals in their natural environments, before experimenting to test various hypotheses. Sapolsky followed in this tradition in the 1980s and 1990s in his study of baboons in the wild. By measuring hormone levels he made important discoveries about how personality affects dominance and stress, at least in baboons.[iii]

Blank slate assumptions have persisted in Western social science, including management theory, despite being falsified scientifically many decades ago.[iv] The longevity of blank slatism in the social sciences is due to their rejecting biology after the 1940s.[v]

Modern ethology was pioneered from the 1930s to the 1950s by Nikko Tinbergen, Karl von Frisch and Konrad Lorenz, who jointly won the 1973 Nobel Prize. They were all from continental Europe, though Charles Darwin published a ground-breaking study of human emotions as early as 1872.

A theoretical innovation of the early ethologists was the concept of the “fixed action pattern”. Contrary to behaviourism, many behaviours are genetically programmed and emerge spontaneously in the developing organism, including humans. An example is human facial emotions. The six basic emotions emerge without learning in all human populations, and are then refined through social experience.[vi] The innateness of the emotions is demonstrated by studies of children born deaf and blind, who nevertheless show the basic emotions. The fact that foetuses smile before they are born makes a blank slate explanation for them highly implausible. The ethological study of humans grew from the foundations laid in studying animals. A leading textbook on the subject is by the Austrian ethologist Irenaeus Eibl-Eibesfeldt, titled simply Human Ethology.[vii]

Human ethology deploys the usual methods of social science research such as interview and questionnaire but also emphasises naturalistic observation and physiological measures. Naturalistic observation was greatly facilitated in quantity and quality by the movie camera and subsequently by low-cost video recording. Audio-visual recording is now a core method in the study of politics and organisations.[viii]

Also distinctive are ethological concepts, which are often drawn from animal studies. Even when studying behaviours closely associated with humans, such as speech, culture and religion, ethology adopts a biological and cross-species perspective. The result is theory that is universally applicable and which integrates non-verbal behaviour, psychology and physiology.

Its integrative character makes ethology especially useful for analysing the health effects of organisations. An example is research into interactions within organisations that links:

2)      Whether the interaction is competitive or cooperative; and

Ethological theory allows organisations to be categorised according to the behavioural systems they engage to motivate subordinates. Three important behavioural concepts are reciprocity, dominance, and affiliation, interactions and relationships found in many species including humans. The following behavioural typology comes from Emotions in Command.[x]   (Click to enlarge.) 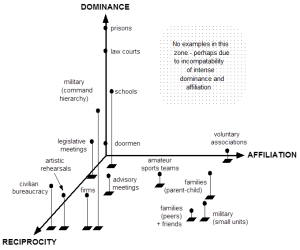 The typology is part of “infrastructure theory” which I developed in Emotions in Command. The theory conceives organisations as resting on the three behavioural systems named above – reciprocity, dominance, and affiliation. These involve motivational systems of the same name that are reliably associated with emotions. Work groups and whole organisations can be categorised according to the behavioural systems used to motivate employees.

One early realisation among ethologists was that humans are a cultural species par excellence who construct elements of their environment. Alone among the species, humans began devising techniques, culturally-transmissible techniques, for influencing their own behaviour. All human societies are based on culturally-transmitted rules, part of the “social technologies” we manufacture with the same brain that invented physical technologies of shelters, knives and digging sticks.

The study of social technologies has several origins, including the Machiavellian school of political philosophy, 19th century English liberal thinkers such as Jeremy Bentham and his pantechnicon, and most scientifically the European and American schools of ethology. I review the history of social technology theory in Emotions in Command (chapters 1 and 2).

This cultural component means that the ethological study of organisations is not focused solely on “body language” but also on the organisational environment, and interactions between them. Although members of organisations are seen as evolved organisms with a repertoire of innate behaviours, they inhabit the artificial environment of organisations conflicts can arise between innate predispositions and work conditions. The ethological perspective has contributed to the critique of formal organisations for their tendency to impose inhuman conditions, including rigid hierarchies and impersonal relationships. (Discussed in the next post.)

The ethological analysis of organisation has made several other findings. All directives have the same segments, beginning with gaining the attention of the subordinate and ending with monitoring of task performance. The segments are shown in the diagrams below, first without feedback and then with feedback.  (Click to enlarge.) 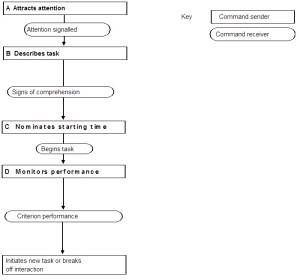 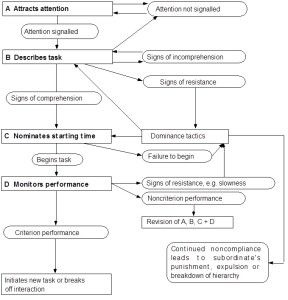 One hypothesis generated by the research is that all successful managerial systems work by elaborating one or more directive segments. In complex organizations specialised staff and sometimes whole departments function to attract attention, instruct in work skills or monitor performance. These findings confirm the ethological principle that an organism can only be communicated with using its evolved communication repertoire.

The next post summarises how ethology can assist the management of organisations.