A recent analysis by American geneticist Henry Harpending has confirmed his earlier finding that the genetic similarity of members of ethnic groups is typically that of first cousins.[1] (Genetic similarity is known as “kinship” in genetics.)

The finding has profound implications for understanding ethnic and racial solidarity and conflict. These implications will be discussed in future posts in HNN. The present report summarises the findings and the methods used to derive them.

The first estimation based on Harpending’s genetic model was made in 2002 using old genetic assay data provided by Cavalli-Sforza and colleagues, in their landmark book The History and Geography of Human Genes, published in 1994.[2]

The new estimation is based on a much larger database recently collected by the Human Genome Project. The new data are also much more accurate. Cavalli-Sforza’s gene tests looked at fewer than 100 sites in the genome. With improvements in technology, the new methods look at up to a million sites spread throughout the genome.

The figures show ethnic kinship in a mixed population of French and Japanese. A fellow ethnic has a kinship of around 0.06, which is just below that of first cousins within an ethnic group (0.065). Kinship with members of the other ethnic group is negative, also at 0.06. 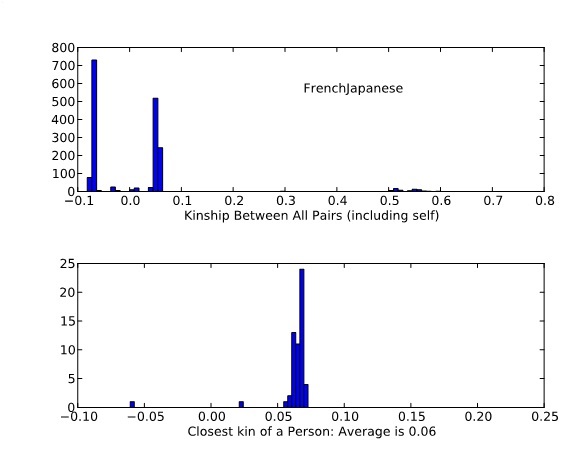 This makes an ethnic group a very large genetic kin group, but only when it interacts with other ethnic groups. Ethnic kinship is zero within homogeneous societies.

In an ethnically mixed society of French and Japanese, an ethnic group numbering one million carries 120,000 copies of each member’s genome. By comparison, a family of three children carries 1.5 copies of each parent’s genome.[3] If children represent parents’ “reproductive interests” or “genetic interests”, ethnic groups represent a much greater interest for their members. Genetically speaking, our ethnic families are 5 or 6 orders of magnitude larger than our nuclear families.

This might seem simple, as if ethnic identity can be reduced to counting genes. That is not how the human mind works, a distinction that I will discuss in future posts. Suffice it that descent is what defines and motivates kinship systems. Members of an ethnic group believe that they share common ancestors, as well as sharing culture. This perceived kinship, expressed in folkloric metaphors such as “shared blood”, explains why ethnic motivation can be so strong. Knowledge of genetics might in principle substitute for folklore but has not been necessary for thousands of years. By and large, beliefs about ancestry are accurate, so that folkloric beliefs about ethnicity generally correspond to genetic identity. This contradicts the sociological theory that ethnicity and race are socially constructed with no role for biology.

A fuller explanation of the original findings and their social and political implications can be found in my book On Genetic Interests.[4] I shall discuss ethnic kinship again in Human Nature News.

[3] In an outbred population.