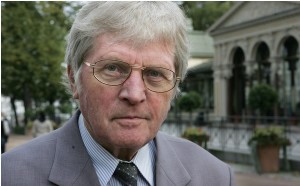 Tatu Vanhanen, a pioneer of evolutionary sociology as well as a long-term colleague, collaborator and friend, died in 2015 at the age of 86 after a long illness.

Vanhanen specialised in cross-cultural analysis of political systems. For much of his career he studied the causes of democratisation by comparing large numbers of societies. He developed an Index of Democratisation. His core finding was that democracy is facilitated by a relatively even distribution of resources, which helps explain why democracy is associated with a large middle class. In the last two decades he used the same statistical methods to study the effects of ethnic diversity and population differences in IQ.

In 2004 Finland’s ethnic agency attempted to suppress Vanhanen’s research. The “Ombudsman of Minorities”, the Finnish equivalent of Australia’s Race Discrimination Commissioner, accused him of racially offensive statements and sought to have police authorities (the Finnish National Bureau of Investigations) investigate whether he had broken the law when he reported his research findings in a media interview. Vanhanen had been discussing his groundbreaking research conducted in collaboration with British psychologist Richard Lynn. A global correlation study indicated that average national IQ was the single strongest predictor of per capita GDP. Like Nobel Prize winning geneticist James Watson, Vanhanen linked low African IQ to that continent’s relative poverty. He was criticised for the same political reasons that Watson was condemned. But unlike Watson, Vanhanen never recanted.

The attack on Vanhanen caused media interest partly because his son, Matti Vanhanen, was prime minister of Finland at the time. Son and father were close but the son distanced himself from his father. Such is the power of the alliance between the political left and minority ethnocentrists in many Western societies.

Tatu Vanhanen’s work, including that done in collaboration with Richard Lynn, was groundbreaking. It shows the potential of sociology once it is stripped of political bias. The impact of his research is still to be registered.

Following is a selection of some significant publications by Vanhanen.